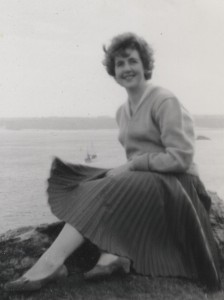 My mother was born on 24 January 1937 in Carlisle, she was the daughter of Deiza Margaret Jenkins (1908-2008) and Thomas (Tom) Francis Hayes (1902-1972). Although she was born in Cumbria, the only reason they were there at the time was because Tom was an insurance salesman and was located there for work, they did not spend that much time there and returned to the family home of Barry and Cardiff in South Wales. She has one older sister (still living).

She moved to London to become a secretary for the AA (Automibile Association) in her early twenties and met my father, John Arthur Martin Wharton on a blind date when they went to see The South Pacific. They went on to get married on 26 September 1959 in St Catherines Church in Cardiff and had three children. After they were married they moved to Sunbury on Thames in Middlesex. She was a housewife and still retained her Welsh accent although it did soften in time.

As a family growing up we would visit our grandmother (Deiza) and her sister’s family often who had since moved to Shrewsbury in Shropshire and she also spent time to look after our grandmother when she was ill, leaving our father to look after us back in London, much to our disappointment because he would always cook us weird things and never buy the right things at the supermarket! She was a true lady and you would never hear her utter a bad word about anyone or anything, she eventually learned to drive as we were growing up (and took 7 times to pass because she was so nervous during her tests!).

After the death of my father in 1985, we moved to Dersingham in Norfolk for two years, this had been planned whilst my father was alive and they were going to move there together upon his retirement from the police in 1986. Whilst we there I attended college and mum although still grieving for the loss of my father did manage to make friends and even took up golf for a while. We stayed in Norfolk for about two years, but she didn’t settle properly and soon returned back to Sunbury.

She was diagnosed with early onset Vascular Dementia in about 1989 when she was just 52 years old. During her illness she moved to Shropshire to be close to her mother. Dementia is such a cruel disease and during the next few years we painfully watched her slowly deteriorate until she could no longer recognise anyone or was able to talk or even feed herself. Although still alive, she had deteriorated so much that she did not even know when her grandchildren were born. She passed away on 16 November 2002 at Beech House Nursing Home in Wollerton, Shropshire,

We have buried her ashes with our father John Wharton at the Church of St Michael of All Angels in Ingoldisthorpe, Norfolk.

Below is a few of my favourite photos of her that we have from our albums.
Please click on any of the photos to bring the gallery up and you can make it full screen.