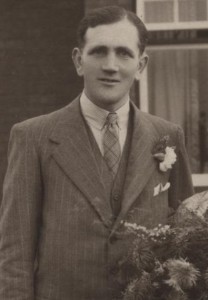 World War 1
On 10 December 1915, at the age of 19, Hugh enlisted with the Army (#78921) serving in H2, 179th Siege Battery  Royal Garrison Artillery as a Gunner and Signaller during World War 1. On his enlistment papers it says his trade was “Farmer” and that he was 5’11 tall. He spent some time in Winchester (presumably training) before being posted overseas on 3 November 1916 and arrived in Le Harve on 5 November 1916.  Thankfully, The RGA were responsible for the heavy, large calibre guns and howitzers that were positioned some way behind the front line.

He stayed in the Army until the war was over in 1919 (posted for dispersal September 1919).  His brother Sidney Alfred Wharton, also enlisted but sadly died during the Battle of the Somme in 1916 just a few short months before Hugh was posted overseas in France as well. One can only imagine the pain that my great grandparents must have gone through during that time.

Marriage and Children
In 1930 he became engaged and 0n 17 November 1931, he married Vera May Martin (1907-1986). Vera was from a large family of farmers in Barmer in Norfolk. Seven months later Vera gave birth to my father John Arthur Martin Wharton on 16th June 1932 and seven years later his brother David Hugh Wharton was born in 1939. It’s believed that Vera lost a girl to miscarriage some time before David was born.

Old Hall Farm, Ingoldisthorpe
Sometime after the war, Hugh began work as a farmer at Old Hall Farm.  I believe his father Arthur Philip Wharton had moved here at some point from Pond House in Bircham Tofts and Hugh eventually took over. All I do know is that upon his death on 25 April 1956 his wife Vera was not able to cope with the farm, with both sons not wanting to be farmers, and my father already a police officer in London. Vera had to sadly give up the farm. Viscountess Ruth Frances Althorpe (Princess Diana’s mother) was listed as owning Old Hall Farm in 1957. Hugh passed away on 25 April 1956 after suffering from cancer aged 59.