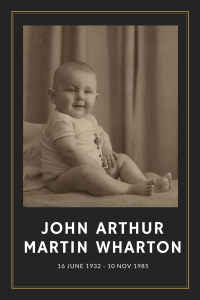 He was sent away to boarding school from the age of 5 and has told us that he felt he missed out on having a normal family life and subsequently didn’t feel a close a family bond as he wished he had. However he spoke fondly of spending his holidays with his father Hugh, walking around the farm.

From the age of 11, he attended  Pangbourne, a Naval College in Reading, Berkshire. From there he joined The Merchant Navy and completed National Service in the Army in the Royal Artillery.

On 26 September 1959, he married Christine Hayes (1937-2002) in Cardiff, Wales.  He met Christine on a blind date (to see South Pacific at the cinema), which was set up by Christine’s sister, whose boyfriend (later to be husband) was friends with John at the Metropolitan  Police Training College in Hendon where John had joined earlier in the year.  John and Christine first lived in a police flat in Islington. They went on to have three children and settled in Sunbury on Thames in Middlesex in the late 1960’s.

John had a highly successful career in the Metropolitan Police raising to the rank of Detective Chief Superintendent. He received a commendation for chasing and detaining armed suspects after a Robbery when he was in the flying squad.

Leading up to his retirement he had planned to move back to live near his mother in Dersingham, Norfolk.However that was not to be and on the 10th November 1985 after a very short illness (about 2 weeks is the only time we had) he passed away of cancer at St Margaret’s Hospital, Windsor. He was just 53 years old.

Below is a few photographs from our albums. Click on any of the pictures to bring up the full album to see the description and comments.